My string quartet „J. S. my friend!“ is based on the Bach chorale “O Haupt voll Blut und Wunden” from the St Matthew Passion. It was premièred by the Belgian Quatuor MP4 in 2015.
J. S. Bach has always played an essential role in my musical life. Whether as violinist – I performed many of his compositions, especially the Sonatas and Partitas for solo violin – or as composer: formal aspects or even quotations are present in many of my compositions in a more or less obvious way.

The idea to compose a piece that is completely based on Bach, preserving the fascinating harmonic and formal aspects of his music, resulted in a kind of „Choralvariationen“. Even this restriction allowed me to freely develop very different and almost opposed musical characters without ever fearing to lose the thread. 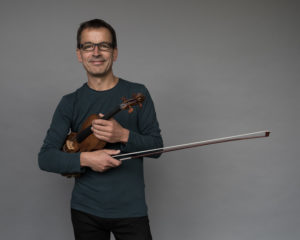